I have a terrible addiction that started four years ago after a friend’s suicide. The night he died, I looked through all of his social media for clues… There it was: subtle yet incriminating evidence of someone who felt completely alone. Images of a broken telephone, of a threaded wire (ordinary things we would never look for as deeper symbolic meanings) on his Facebook, as well as updates like: “Seeing ALL my friends tonight. Cheers!” His Twitter was flooded with monologues – “No one sees me.” “Hello, are you listening?”

We were close at varsity; but, with most friendships, ours had its moments of distance. Sadly, I am one of those that live by the rule: “Out of sight, out of mind.” Facebook has made me a lazy friend. I used to phone and message people regularly, but now that most people advertise their lives, I don’t see the point. The ones I see the most are the ones that are the least active on Facebook.

RIP: What happens to your social media post-death?

I thought I was doing an okay job: every time my friend checked in somewhere, I liked it. Every time he posted a photo of himself with a new award, I liked it. I had no idea he was lonely. He was the soul at every party. As most of us know, social media gives us a false sense of belonging and of knowing everyone’s business.

An old school pal messaged me the other day: “Wow… You really are a terrible friend…” “Huh?” was my automatic reply. “You never message me. Guess where I am? A mental institution.” I had no idea, through all her beautiful photos of her children, the thought never even crossed my mind. Like most, she had been posting blissful photos to hide her extreme pain. 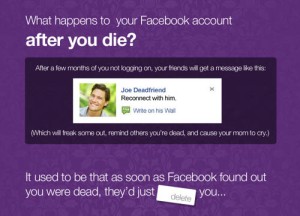 REMEMBERING: Facebook is made up of memories and friendships, which can be stirred up through lack of activity…

My addiction continued two years ago with the suicide of a Tuks lecturer. I looked through all his publicised photos. The ones made public (with that world icon) were actually the most painful to read, even though they were very few. Then this year, I realised my addiction had to stop. I read through the social media of the young girl (14) who killed herself at Northgate Mall. All she had were beautiful photos with very little hints of her darkness… And then I read through her mother’s updates and started crying. I was crying over a stranger, but a stranger who reflected my friend, who reflected my weakness, who reflected my pain through her mother. “If only I had known…” her mom posted over and over again. If only I had too…

After we die, our social media carries on quite the same, except suddenly people who never spoke to you for the last five years, start reaching out. TOO LATE. Everyone messages more: on your birthday, special days you shared and the anniversary of your death. SCARY.

WHO AM I? Does Facebook give a false sense of popularity?

It’s time to realise that in a time of so much communication in the form of Whatsapp, Skype, etc, people have actually never felt more alone. Touch is what we need, not a “like”. A cup of coffee is what we crave, not “a selfie.” A genuine “How are you?” beats a “What you up to tonight?” In fact, social media is anything but social. It causes us to shut down when trying to have real conversations, it allows us to become cyberbullies on difficult topics like religion, race or politics, it causes us to be quite narcissistic with an array of selfies and holiday snaps.

Is anyone reading this…?

I’ve entered the SA Blog Awards for a second time! The public voting phase runs from 19 December (Wednesday) to 28 December 2012.

Please click on the badge below, enter your email address and CONFIRM you have voted on your email.
If you do not confirm, your vote will be considered VOID.
Please share and help me win 🙂 THANK YOU!

The WordPress.com stats helper monkeys prepared a 2011 annual report for this blog.

The concert hall at the Syndey Opera House holds 2,700 people. This blog was viewed about 26,000 times in 2011. If it were a concert at Sydney Opera House, it would take about 10 sold-out performances for that many people to see it.

“I feel alive
And the world, I’ll turn it inside out! Yeah!
I’m floating around in ecstasy,
So don’t stop me now…
I’m a shooting star leaping through the sky…
I’m gonna go go go there’s no stopping me
I’m burning through the sky, yeah…”
Queen, Don’t Stop Me Now 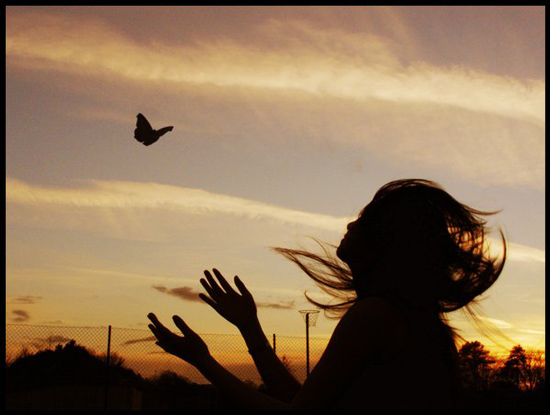 TIME TO SOAR: The butterfly counts not months but moments, and has time enough. ~Rabindranath Tagore PIC: Online

I recently started two new blogs and they’ve been as exhausting as that shooting star burning through the sky, YEAH!
Check out “Respatialized” on www.erasmusjourno.wordpress.com.
It gives a platform for my Journalism classmates to start writing about life as a Mundus student, articles on politics/ finance/ war/ culture and more. The aim of the blog is to give an overview of what it feels like to be an exchange student and not being able to write in your mother tongue.

Then there’s “Any day Aarhus” on www.anydayaarhus.wordpress.com.
It’s all about the little city of Aarhus, where I recently became a Goodwill Ambassador. The aim of the blog is to promote Aarhus as ideal student destination.
Here is the video that won. Unfortunately, it was not my group, but at least Aarhus came first!
http://www.youtube.com/watch?v=KbeDX-TCMN8&list=LLdHFy_rrkycw7k8LzxnIqdg&index=2&feature=plpp_video

This is my first class blog, presented to my Erasmus Mundus classmates from the Journalism, Media and Globalisation programme 2011-2013. I discuss the workshop from this evening, which focused on Blogging&Tweeting: how to blog, the history of blogs, the blog definition, etc…

I also include a list of which people blog in the class, as well as addresses to fascinating blogs. The reader is also given instructions on how to blog efficiently and effectively using WordPress.