“I have been a witness and these pictures are my testimony. The events I have recorded should not be forgotten and must not be repeated.”
James Nachtwey

In the Killing Fields

When legendary photographer Robert Capa claimed: “If the picture wasn’t good enough, you weren’t close enough,” it’s as if he had James Nachtwey in mind.

Nachtwey has been to some of the most war-torn places in the world: Bosnia, Sudan, South Africa, Iraq and Afghanistan, amongst others. He is often on scene with soldiers, terrorists or war-crazy citizens. It was only while photographing a bomb explosion, skin melting off his arm that he realized his obsession with getting the right shot had taken over his life and sanity. Nachtwey suffered for years from post-traumatic stress disorder. In various interviews, he describes his nightmares as simple recollections of what already had been, only now the mangled corpses were screaming out in pain, asking for help.

His horrific experiences turned Nachtwey into a recluse, unable to communicate properly with his family and colleagues. Nachtwey has since admitted that he is slowly recovering and jokingly claims: “Somehow the only way to replace such morbid pain and anger is to be fascinated by that which is even more morbid. It is a never-ending love-hate relationship with what you are witnessing.”
When Nachtwey speaks, his voice is as steady as his hand on the camera. There is a monotony to his voice that makes him sound like a Shaman amongst photographers. It has become more than just a profession, but a passion. His colleagues in the documentary War Photographer describe this as a passion-turned-obsession. Even after the shot is taken, Nachtwey will spend hours cropping and changing levels of light or saturation on Photoshop. Nothing, however, is manipulated, but only aimed at getting a better account of what happened. Nachtwey has claimed for years that the credibility of one’s pictures is all about your own account and testimony on the field. His photographs are often on eye-level, to make the viewer feel as if he/ she was there.

DESPAIR: Nachtwey's account of the famine in Sudan during the 1990s helped open the world's eyes to what he calls "the weapon of mass extermination." PIC: James Nachtwey/ site

Cream of the Crop

Zimbabwean photojournalist Richard Con* hails Nachtwey as “the most legendary photographer of all time,” stating:

“When Mugabe’s militants tortured me for ten hours to get my photos, I thought of Nachtwey in that documentary claiming every bit of torture, whether expected or not, is worth it. But yet, I’ve come to realize people act in front of the camera. When I photographed civil war in South Africa around the same time as Nachtwey, I realized men become savages to seem more amazing on film. That is when I had enough…”

CNN foreign correspondent Christian Amanpour describes Nachtwey as “a loner…a mystery” with an incredible drive, yet compassion, for those he photographs. Nachtwey insists in the documentary that a photographer must never force him/herself upon the scene. He has learnt the most effective photographs come from respecting your subjects. Their grief somewhat becomes your grief. When they cry, you take a few pictures and offer them tissues and a few kind words. After all, they have offered you an intimate look into their personal world.

Susan Sontag criticises photographers in Regarding the Pain of Others as insensitive, yet Nachtwey has learnt to creatively use the pain of others. He will, for example, photograph only half a crying face for more effect, as if the subject is still searching for some guidance or reassurance that will make them whole again.

Some have criticised this symbolism, while others have hailed it as ‘genius’ and ‘works of art.’ Nachtwey, however, does not see his pieces as ‘works of art’ but as fragments of people’s pain, suffering and daily life. He boldly claims:

“I do not want my works to be hung up in people’s homes as masterpieces. How can someone’s extreme pain be a masterpiece? Each piece is sacred, an intimate bit of his/ her life.”

BANG BANG: The documentry War Photographer, produced by Christian Frei (2001), is a bitter-sweet reflection into Nachtwey's passion, life and relationships with his colleagues. PIC: Online

Nachtwey’s signature trademark of photographing everything in black and white has shown the importance of composition over colour. “Jim” as he’s known amongst his friends has been in the business since 1980. He was first part of Magnum photo agency, then co-founded his own agency VII with other worldwide photographers.
Greg Marinovich and Joao Silva describe Nacthwey as “the missing member” of their Bang Bang Club in their book with the same title. Nachtwey covered some of the civil war between two tribes in South Africa: Xhosa (African National Congress Party) vs Zulu (Inkatha Freedom Party). Nachtwey was the one who carried wounded Marinovich to safety in 1994 and helped carry the body of his dead colleague Ken Oosterbroek. The movie with the same title is currently on circuit.

“Sometimes, one picture will touch one person then another and suddenly I am swarmed with people offering money, food or shelter. It is then that I realize even just one picture was all worth it.” 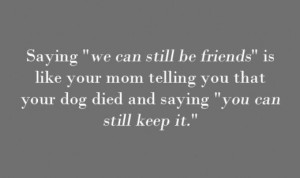 There are two types of break-ups: the awkward “Let’s still be friends on Facebook” kind or the “Get the hell out of my life” kind. Personally, I prefer the latter. Yes, yes, there are very slight exceptions.
But why still be ‘friends’ with someone who probably made you cry and stress twice as much as made you laugh, who broke down your self-esteem and who made you believe in inflated promises?

Yes, it’s fascinating to be able to ‘spy’ on them virtually, but what for? Is it to remind you that, yes, life does indeed go on; other girls or guys will come and go, just as you did. Is it perhaps to see how their receding hairline has now transformed into complete baldness or see that they have put on 20 kilograms in the last six months? I doubt it, as no sane person puts up such unflattering pictures.

What is the point of a break-up?

Exactly that: A POINT!

Each break-up toughens your mental sword. You suddenly realize you are human and highly emotional, either through grief, anger or disappointment.

You also realize you are more equipped now than ever before: you are great at flirting, at making your friends laugh or at enjoying life like never before.

An incompatible person will always make you feel just that: INCOMPATIBLE. He/ She will make you believe you absolutely need to stop smoking, need to go to gym more or not spend as much time with your friends. Once you do as requested, he/ she will eventually get bored with you and find a new ‘flaw’ to focus on.

Ironically, there is a lot to fear when this happens:

This comes from failing in other relationships, where you thought of yourself as just another experiment.

Here, though, you should transform from experiment to experience: see your true worth, embrace it and immerse your partner in it too. True bliss comes from peace of mind and sure belief in one’s choices and one’s new relationship…

From old to new: