When you look at Mark Smith’s class photo, you see an ordinary guy trying to crack a smile. Look a little closer…
He stands quite isolated from everyone else. There are cuts on his arm he’s trying to hide. There’s a pain in his eyes. His mom raised him alone. She had various boyfriends who taught him how to use a gun. A gun was the only thing he could handle. It felt good. It felt powerful. It represented a sense of belonging. An anchor.

During break/ recess, Mark often sits alone reading a random comic, trying to laugh. He will sometimes creep up into the computer room and watch YouTube in secret. He loves rap. He loves these guys who know exactly how to act. He learns that not giving a damn is the only way.

Once home, he opens his school journal. Another negative note from his teacher: “Mark was not ready today. Mark could not do his presentation. I am disappointed. This is the third time.”
He tears it up. He writes a fake note to show his mom, “Mark’s presentation went very well. Thank you.”
His mother glances at the paper, beer drooling from the sides of her mouth.
“That’s nice, my boy. You can play in your room a little longer today.” 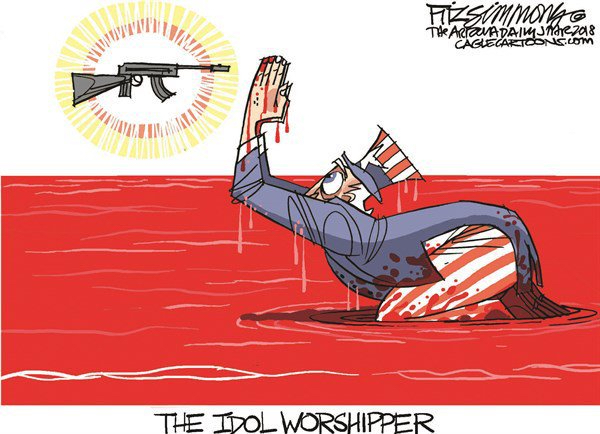 GUN WORSHIP: Gun control treats the symptoms, not the cause.

He rushes upstairs, locks the door. He places his headphones on and glares into the screen. He watches these school shootings over and over again.
He fantasizes about his teacher pinned against the wall, saying sorry for each time she picked on him:

“You were alone. No one could help you. I understand now.”
“Too little, too late, Mrs Sanders. And now, no one is going to help you.”
He shoots her at point-blank range.

Mark now fantasizes about the guys who laugh at him at break.
“Loser… You’re so weird.”
He sees how truly vulnerable they are against his gun. He smiles.
The adrenaline rush takes over. He starts sweating, even panting.

His mom yells out from the staircase, “I’m hungry. Get cracking…”
“I’m starving too, mom…” he whispers under his breath, “Starving for you to just take the lead sometime. To tell me when it’s not okay. To talk to me, instead of stuffing an iPad or phone into my face to keep me busy. To tell me I’m normal. Am I even normal?”

It hits him.
Mark is a stranger to his own mother.
His own teacher.
His own peers.
His own self.
Mark is currently 10 years old.

Mark could become any of these other school shooters.
Gun control may remove the symptoms, but not the cause.
Discipline begins at home, yes. But, self-discipline gets crushed by various factors:
– lack of love
– lack of empathy
– emotional and physical bullying
– cyber-bullying
– lack of respect

Even though guns have been around for over 200 years, being unheard is huge in the last 30 years. We live in an era of mass communication, with no one truly communicating.

To parents out there, be part of your child’s life. Go support their school play, their dress rehearsals, their sports match and know their friends.
Show interest in the shows they watch and the music they listen to. It illustrates your child’s psyche.
Raise your child to enjoy childhood (not be stressed out by it), to respect others, to do chores, to give him/ her a purpose. Or else, his/ her only purpose will be to engrave his/ her name within history books as another delinquent, another statistic.

To children/ teens reading this: It does get better. Clichéd, I know. Bullying seems to be a rite of passage in school. Hold on. Befriend them, or stay away from them. And, most importantly, stay away from that shadow within you that feeds upon revenge, as tempting as it may be.

As a teacher, I have this to say to those in the same profession:
Forget about written homework. Give them self-reflection. Ask a philosophical question to debate upon in class.
“What makes you happy?”
Link this to the areas of their lives: family, friendship, school, games they play.
Also, speak to your students. Know who the others are afraid of, who they never invite. Know who sits alone. Know who gets called names. And, know who you unknowingly pick on the whole time…